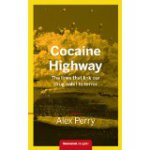 IT BEGINS WITH A BOAT. Small, white, with two large outboards – a speedboat. The pilot has feathered his throttle and is crawling upriver. The scenery suggests an estuary. The water is a muddy aquamarine. Aside from the grassy bank where the soldiers have parked their pick-ups, the river has no shore, just ankle-deep mud flats shelving up to a curtain of mangrove, behind which lies an endless, still and inky swamp.

The pilot spots the soldiers. He turns in, cuts the power and glides. The soldiers, 25 of them, wade into the water up to their waists. One catches the boat by the prow, another jumps aboard and the rest form a line stretching to the shore. The soldier on board passes out a large black and brown canvas bag to a man in the water, who passes it over his head to the man behind, and he to the next man, and so on, all the way to the pick-ups. There are 50 bags, all identical. From the look on the soldiers’ faces and the strain on their arms, the bags are heavy, perhaps 20 kilos, making a boatload of a round ton. After they unload the last bag, the soldiers push the boat back out into the current, and the pilot fires his engine, turns in a lurching swirl and heads back downriver. The soldiers climb into the pick-ups and sit on top of the bags. The film cuts.

I once drove deep into the Sahara to hear how someone landed a Boeing 727 in eastern Mali in November 2009, dropped off 10 tons of South American cocaine and then torched the plane. Another time I took a taxi out to a village in Guinea-Bissau on Africa’s western tip to hear a 62-year-old woman describe how one night in December 2011 a plane landed on the road outside her house and unloaded two more tons of the drug. I returned to Guinea-Bissau this September when I heard about the speedboat film. It was less spectacular than the other drops. But since the delivery happened on June 23 this year, it was evidence that large-scale cocaine smuggling was continuing. And since the soldiers had been caught on film smuggling cocaine, the Marines’ faces and uniforms fully visible in the daylight, it was the most definitive proof to date that Guinea-Bissau’s military – or parts of it, at least – were one of Africa’s biggest drug-smuggling outfits.

That also made it the kind of film people died and killed or even staged a coup over. Since all those things happen fairly regularly in Guinea-Bissau and since a journalist I know there carries a pistol in his satchel and keeps a Kalashnikov under his pillow, I can say merely that the film was shot in a creek near a military base in southern Guinea-Bissau, just inland from the Atlantic. I cannot say who made the film or why, or even show it on a website as the angle from which it was shot might identify the cameraman. The only reason I can write about it is because I don’t live in Guinea-Bissau. The only reason I can write about any of this – how cocaine smuggling is ruining an area of Africa the size of Western Europe – is because I have agreed to identify almost no one who spoke to me.

Despite these handicaps, the story of cocaine and Africa is one worth telling because it is a missing piece in our understanding of several modern phenomena. It helps explain how Islamic militant groups in the Middle East and Africa, including al-Qaeda, gather popular support. It also accounts for how they earn billions of dollars a year. It provides one reason why Africans are often so cynical about foreign assistance: because Western aid workers, diplomats and soldiers frequently find themselves, if not quite in business with drug smugglers, then their political, financial and military backers. The thriving smuggling route from Latin America through Africa to Europe also explains why cocaine in Europe is now as middle class as Volvos or weekend farmers’ markets.

This is not another story about how drugs can screw you up. This is a story about how Europe’s appetite for drugs screws up the lives of hundreds of millions of others. The closer you look at the cocaine business, the clearer it becomes that every time one of us – or our lovers or colleagues or children or their friends – buys a gram, we are helping keep an African country in the sewer and feeding the sort of groups that like to behead hostages on TV. This is story about lines, yes, but less about the lines racked out every weekend on coffee tables and in nightclub toilets in London or Madrid or Frankfurt or Tel Aviv than those other lines, those that run dead straight from that to this. “You know, this is not some small game,” a Western diplomat in Guinea-Bissau once told me. “This is about financing terrorism on Europe’s southern border, about drug money from Guinea- Bissau and Mali being used for a bomb in London.”