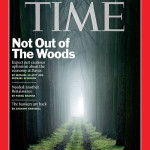 To meet the future of retail banking, cross Moi Avenue into the rougher part of downtown Nairobi, pass the Chicken Spot restaurant and squeeze between four stalls selling counterfeit mobile phones, and you’ll reach a door — and behind it a tiny room containing a hat stand, a wall calendar, a strip light and a desk.

Patrick Maina’s offices don’t look like a bank, his bank — Safaricom — doesn’t sound like one, and Maina doesn’t appear at all like a banker: 38 years old, he likes his suits iridescent and his head shaved; his manner is friendly and modest. Maina’s results over the past few years are particularly unbanklike.

While Western banks crashed, Maina’s fortunes rocketed. Started with an investment of $1,000 four years ago, his financial empire now runs to 218 outlets across Kenya. Underlining how different Safaricom is from conventional banking, Maina praises his company not for how it enriched him — he earns $150,000 a year and owns a Lexus and a house in an upscale Nairobi housing development — but for how it boosted a nation. “Safaricom helped people, upgraded their lifestyles, helped them to get jobs,” he says.

Safaricom also helped start a banking revolution, one coming to the world from Africa. Says Carol Realini, executive chairman of Obopay, a California-based mobile-banking innovator: “Africa is the Silicon Valley of banking. The future of banking is being defined here. The new models for what will be mainstream throughout the world are being incubated here. It’s going to change the world.”

So what is it? For a start, it’s banking as envisaged by nonbankers. Safaricom, as the name suggests, is not really a bank — at least it was not originally. It was founded in 1997 as a Kenyan cell-phone company, and for a decade connecting Kenyans was what it did. That in itself was an innovation: most Africans have never had a landline (and now, courtesy of the leapfrog effect of mobiles, most never will). The number of African mobile-phone subscribers went from zero a little more than a decade ago to 506 million by the end of September 2010, and they are expected to total 800 million by 2014, according to industry analyst Informa Telecoms & Media.

And in developing countries like Kenya, the arrival of an accessible communication network — for most, their first — has had a profound effect on economic growth. Studies by the London Business School, the World Bank and the consultancy Deloitte found that for every additional 10 mobile phones per 100 people in a developing country, GDP rose 0.6% to 1.2%.

The link between development and phones provided the context for further innovation, much of it using the cheapest form of mobile communication: text messaging. Out of that came South Africa’s Mxit, a social network based on texting; txteagle, a developing-world outsourcing network; and mPedigree, a Ghanaian service that determines whether a medicine is genuine or counterfeit from its bar code, sent to a central number by text.

In that rich environment, it was a natural step for Safaricom to launch its own text-message innovations, including a “flashback” service, which allows mobile-phone owners who can’t — or won’t — pay for a call to let other subscribers know they are trying to reach them, and Kipokezi, which allows users to send and receive e-mails as text messages.

But the big change came in 2007, when Safaricom launched a money-transfer-by-text-message service called M-Pesa (M for mobile, pesa for money in Swahili). The idea is simple: A Safaricom subscriber takes cash he wants to transfer to another person, along with the recipient’s mobile number, to a Safaricom agent like Maina. The agent takes the sender’s money and, for a small fee, uploads the value to his or her prepaid phone account, then sends on the credit to the recipient’s phone account.

Mobile banking has been available for years in Japan and elsewhere, but only on a limited basis. M-Pesa’s growth has nonetheless been extraordinary. Agents blossomed across the country and total 19,000 today. Of Safaricom’s 16 million customers, 12 million have M-Pesa accounts — this in a nation of 39 million people.

The world has taken notice of such success. Obopay is developing mobile-banking services for clients in the U.S., India and Nigeria. “There are 100 countries around the world looking to Kenya and asking, ‘How do we do that?'” Realini says. South Africa’s MTN, one of the world’s largest mobile operators, announced last year it was rolling out its own service, MTN MobileMoney, to 21 countries. Vodafone, which is part owner of Safaricom and which first proposed a mobile-banking experiment in Kenya, is even taking mobile banking to Afghanistan.

The secret of M-Pesa’s success is simplicity. In a world where sending money home used to require a hard-to-obtain bank account, Kenyans can now send as little as $1.20 to one another for minimal cost, with no risk, in seconds. The advantages over a regular bank are clear, says Maina: “Some businessmen want to deposit too little for them to stand for a long time in a queue. Others are shabbily dressed or illiterate or they forget their signatures. It’s just easier to operate with M-Pesa.”

Economists have a second explanation for M-Pesa’s success. In his seminal 2004 book, The Fortune at the Bottom of the Pyramid, development economist C.K. Prahalad outlined a huge opportunity for businesses that had long assumed that being poor meant having no money. The poor did have a little money, it turned out, and there were billions of them, a massive untapped market for the companies that could figure out how to serve them. Mobile banking is the best evidence yet that Prahalad, who died in April, was right. Before mobile technology, most of the developing world was unbanked. But as Safaricom and others have demonstrated, that was because of lack of supply, not demand. “If you asked me in March 2007 did I think M-Pesa would be so big, there’s no way,” says Safaricom’s founding CEO, Michael Joseph, who recently stepped down. “But I shouldn’t have been surprised. There is money available. [It’s just that] nobody knew about this market, this potential, four years ago.”

That’s good news for the poor, who are suddenly talking and banking long distance. But the rich world has tons of money. How long can a situation last in which Kenyans — and South Africans, Ugandans, Japanese and Filipinos — can bank by mobile phone but Americans and Europeans can’t? Moreover, says Realini, even the world’s biggest economy has a bottom to its pyramid: her research shows the poorest 30% of Americans are underbanked — unable to access the credit and finance it can afford. Evidence of that untapped demand, she says, can be seen in peer-to-peer banking, online transactions that link lender to borrower directly, cutting out banks altogether. It’s one reason Walmart tried, unsuccessfully, to buy a bank.

Don’t be surprised to see Kenyan-style mobile-banking apps on your phone in the near future, says Realini. William Maurer, a professor of anthropology at the University of California at Irvine and the director of the Institute for Money, Technology and Financial Inclusion, says banks are missing a market. Banks that stick to the old model — offering a limited range of services, for often hefty fees, to a limited group of wealthy people — risk being outflanked by the customers they ignore. Maurer says the lesson of Safaricom is, “Don’t forget about the customers. They’re doing interesting things. [They’re] innovators in their own right.”

Safaricom has taken that message to heart. Its new innovation: an alliance with a brick-and-mortar bank. That idea evolved from Safaricom’s observation that Kenyans were using M-Pesa not just as a transfer service but also as a savings bank. M-Pesa allows deposits of up to $600 per day, and many subscribers, Safaricom noted, were depositing cash and just leaving it there, where it was secure. A tie-up with Nairobi-based Equity Bank means M-Pesa customers can now have their bank accounts linked to their phone accounts, with all the extra benefits that entails, such as interest and access to ATMs and debit cards. It’s a neat reversal of the way traditional credit checks work. In the West, your bank account acts as the credit record necessary to obtain a mobile phone. In Africa, your prepaid mobile phone is your credit record and your passport to a bank account — and savings, loans and a credit card.

The alliance is yet more bad news for traditional banks, not least because Equity also represents a challenge from another angle. Founded in 1984 as a microfinancier, Equity now covers Uganda and Sudan as well as Kenya, where it accounts for 57% of all bank accounts. Its customer base of 5.7 million is the largest in East Africa. Equity’s CEO, James Mwangi, is unrepentant about the havoc his company and Safaricom are wreaking on the old ways. (Kenya’s banks tried but failed to shut down M-Pesa in 2008.) For too long, he says, banking was about exclusion: “You are poor, you don’t belong.” Now it has been “transformed, completely reinvented.”

In a new environment where inclusion is the watchword, banks that do not adapt will die. “They have very good reasons to be worried,” says Mwangi. “Innovation is a game changer. It will consign some banks to irrelevance, liquidation and insolvency.” What, again?