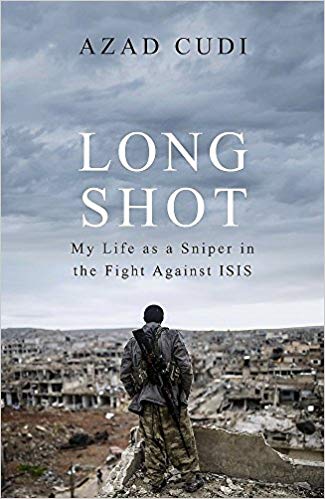 ‘Night after night, day after day, month after month, I had lain behind my rifle. Through scorching summers, chilling autumns, endless winters and wet, numbing springs, I had kept the enemy in my crosshairs. I had burned my eyes with looking. I had survived other snipers, gun attacks, suicide bombers, tanks, mortars, rocket grenades, booby-traps, trip-wires, stray air strikes, artillery strikes, heavy machine guns and remote controlled mines. On a diet of scavenged cheese, jam, the occasional yoghurt and biscuits, I had wasted away to the weight of a thirteen-year-old boy. Without sleep, I lurked in the abyss between adrenalin and exhaustion. So many of my friends had died that I had acquired a new, unwanted duty: to survive in order to keep their memories alive. Observing, waiting, shooting — I packed all life into that tight existence. If you had seen me back then, carrying my trigger finger through the sharp edges of war as though it were a baby, you would have understood that human beings can survive almost anything if they have purpose.’

‘A book to marvel at, learn from, and return to again and again.’ John le Carré

‘This record of what [Azad Cudi] did and went through is profoundly affecting … accessible and, for a complacent westerner, chastening. There are horrors but also humanity – inspiration, even, alongside the tragedy. A surprisingly lyrical tribute to a much-put-upon people and to fallen comrades in arms – as often women as men – that deserves a wide audience.’ Fergal Hallahan, Book of the Week, Irish News

‘Striking and memorable. The first thing to note about [this] memoir is its prose … observant and restrained, and totally lacking the swaggery male insecurity that disfigures so many of these books. Instead, his is filled with practical, simple descriptions of combat and sniping. The figurative language, because it is deployed sparingly, tends to work. Much of the narrative is unnerving, as it should be.’ Graeme Wood, Wall Street Journal.

‘As a sniper his job was to pick off ISIS fighters. He was remarkably successful … and describes his experiences in vivid prose’.  James Murray Daily Mirror

‘Gritty, clear, thoughtful prose. A propulsive memoir that captures the grim reality of small-scale conflict and reveals the fragmented politics of the Middle East today.’ Kirkus.