The Second Coming of Tony Blair

The Second Coming of Tony Blair 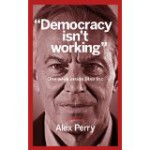 On a December morning in 2014, a four-car convoy of black SUVs swept out of the polished limestone arches of the American Colony Hotel in East Jerusalem and drove south. Skirting the walls of the old city, it passed Mount Zion and its small, ancient church where King David lies buried and where Jesus was said to have hosted the Last Supper. Leaving the old city behind, the convoy hit smooth asphalt, passed tower blocks and an art cinema, overtook Israelis travelling to work in turquoise buses and broke out into the terraces of cypress and olive on Jerusalem’s outskirts. In 15 minutes, it reached a security checkpoint in front of a towering concrete security wall and was waved through – into Bethlehem, the West Bank, and soon, another world.

On this, the Palestinian side, the roads were potholed and the wall was covered in graffiti and a host of murals by British street artist Banksy. The housing was old and squat, and the cafés and stores empty or boarded up. From the surrounding hills, in every direction, shiny white fingers of walled Israeli housing spilled down towards the city like concrete lava. Cut off from the outside world by the wall, most Palestinians seemed to be wandering the streets simply for something to do.

At 61, Tony Blair looked trimmer than when he was in power, more sharply dressed with shorter, greyer hair. He also seemed more at ease: tie-less, tanned, a gold chain visible under his shirt. His focus for the day was tourism. Since taking the job of Representative of the Office of the Quartet on the day he stepped down as British Prime Minister in June 2007, Blair had been routinely described as a “Middle East peace envoy”. In reality, the US Secretary of State mediated political negotiations while the mandate of the Quartet – an abridged version of the international community comprising the US, the EU, the UN and Russia – was more restricted but more pragmatic: building up the Palestinian economy.

The divisions in Israel, which required Palestinians moving much beyond their home to waste hours a day at checkpoints, meant Israelis earned an average 10 times as much as their neighbours over the wall. Even without the politics, that disparity all but guaranteed more conflict. And with historic sites like Bethlehem, Jericho and the Dead Sea, plus Roman, Persian and Ottoman ruins – and even Banksy’s murals – the best hope for a thriving Palestinian economy was tourism.

The lifelessness that now confronted Blair in what should have been the pre-Christmas high season illustrated how dead the political process was. In the summer, Israel had fought a war with the Palestinians in Gaza, the narrow and dismembered Palestinian strip on the Mediterranean. As the bullets flew and peace evaporated, the tourists vanished. Still, the economy was Blair’s mandate and that meant tourism, so his convoy was soon pulling up outside the Palestinian tourism and antiquities ministry.

Minister Rula Ma’ay’a’s third-floor office was cramped and cheaply furnished. On the walls were ancient tourist posters depicting Palestine in the 1930s, before the creation of Israel in 1948. Once, the posters had been advertisements. Now they assumed a more weighty purpose: artefacts of a diminished identity and a disappearing homeland.

Gamely, Blair tried to stick to his mission. “We’re working on a package for Christmas tourism,” he said. “What do you want the Israelis to do?”

The minister regarded him. “What do we want them to do?” she repeated.

Blair realised his mistake. “Well, apart from the obvious . . . ” he began.

“What we want,” interrupted the minister, “is for them to leave Palestine and give us our independence back! They promise and promise, and you try to help, but we get nothing from them.”

“It has been promised for a long time,” Blair said.

“The Israelis want everything for themselves!” exclaimed the minister. “They do not want to give us anything. I used to say they gave us peanuts. But they do not give us peanuts now! They give nothing!”

“We are working to try to change things,” Blair tried again.

“I think you should push more,” replied the minister.

“It’s tough,” he told the minister. “It’s really tough.” Then he inhaled, raised his eyebrows, opened his arms in a wide shrug and made a fish mouth, clamping his bottom lip over his top one, an expression members of his staff call his “shit-happens-move-on” face.