The Unstoppable Romance of Alex Salmond

The Unstoppable Romance of Alex Salmond 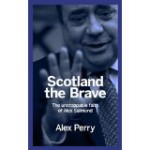 A bitter March wind is whistling off the Clyde, hurrying the last few commuters onto their trains at Glasgow Central Station, but a floor above, in the golden ballroom of the Grand Central Hotel, the man who would tear the United Kingdom apart is bathing in a warm glow of love.

“Alex,” says a middle-aged woman at the front, trying not to cry, “you took the nation into your hands. You helped us go forward. When we lost, I went up to your house and sat there for an hour and a half, crying my eyes out…”

“Oh, Alex,” says a neatly suited man in a trembling voice, “September 19th was such a day of heartbreak. How did you find the strength and resources to come back?”

“Alex,” shouts a young woman at the back, holding up a phone, “can you say happy birthday to me nan?”

Tonight’s event is to launch Alex Salmond’s book, The Dream Shall Never Die, based on a 100-day diary he kept during the 2014 referendum campaign on Scottish independence. Salmond and his Scottish National Party (SNP) lost that vote 55.3% to 44.7%. Yet tonight he is putting on a winner’s performance. Walking off stage into the audience, he draws them into a huddle to tell them about the day, 19 September 2014, that he lost the vote for independence and resigned as First Minister of Scotland and leader of the SNP. He and his wife, Moira, bade goodbye to his staff and caught a helicopter home to the small northern Scottish town of Strichen, where the couple live in a converted mill on the edge of the Highlands. The pair left Edinburgh, he says, in bright evening sunshine and flew north up Scotland’s icy coast. As they passed Dundee, into Salmond’s head came Robert Burns’s reworking of an old Jacobite song, Bonnie Dundee:

Then awa’ to the hills, to the lea, to the rocks,

Then tremble, false Whigs, in the midst o’ your glee,

Ye ha’ no seen the last o’ my bonnets and me.

Salmond reads the poem quietly. The audience cranes in to hear. As he speaks the last, defiant line, they erupt in a swell of clapping, stomping and yelling that lasts a full minute. When the applause finally dies, Salmond tells them how Dundee gave him the seminal moment of his political life. He is canvassing in the city when he comes across a queue of hundreds of people registering to vote. Many are doing so for the first time in their lives. “This is the first time there has been anything worth voting for,” a man tells Salmond.

This is for what Salmond has worked for 40 years. Finally, the longed-for Scottish Awakening is happening. He compares it to the dawn of black freedom in South Africa 20 years before, at the first free election after apartheid, when people queued for hours to exercise their right to vote.

He wipes away a tear. “The country which started the referendum campaign is not the same Scotland we are living in now,” he says. “The people who emerged are different from those who embarked on this journey. They are more energised, more mobilised. That’s why they are likely to take the first opportunity to move this country forward.”

Salmond stares out at the audience, then looks up.