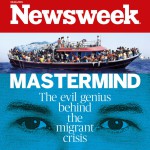 by Alex Perry and Connie Agius

It is a sunny morning in April 2015 on Sicily’s east coast and Mount Etna is a postcard, rising from a green-blue sea up through olive groves, orange orchards and steep hill towns to ascend a towering snowy cone ringed by cotton-wool clouds. But in the centre of this Mediterranean tableau, at the end of a long quay in the port of Augusta, is an anomaly: a monstrous dull, grey Italian gunboat, on whose rear-deck 447 people are huddling under heavy brown blankets.

At the guardrail is a man, in his mid-thirties, with a wild beard and a baby on his hip. Beside him is a woman in an abaya, who is holding the hand of a small girl in pigtails with a grubby pink rucksack on her back.

The family’s faces are smeared with dirt, grime has turned their hair to wispy fur and their clothes, once different colours, are merging under layers of white dust and brown filth. In these bright and sunny surroundings, the refugees seem so out of place that, at first, the mind tries to consign them to another place or time: a newspaper photograph, or an aid poster, or a picture of the Holocaust. But then a sea breeze carries ashore their sour-milk-and-manure stink, making the Red Cross workers standing on the quay recoil under their facemasks and hooded suits, and any illusion of distance evaporates. How is it possible to be still alive and yet smell so much of death?

The Italian navy rescued these men, women and children over the last week as they tried to cross the Mediterranean from Africa to Europe. Four days earlier, 800 other migrants drowned when their boat sank off Libya. These, then, are the lucky ones. The Red Cross seems unsure how to treat its new charges, handling them at arm’s length and using rubber gloves, but keeping the refugees to itself, shooing away cameramen and photographers. The group is, however, allowing a British publicist from the UK NGO Save the Children, Gemma Parkin, to talk to the refugees, and Parkin is passing on what she hears to reporters. Parkin is doing this because she wants European leaders debating how to stop the migrants to hear about the months and years they spent getting to Europe, and what it cost them: almost always a lifetime of savings; and, in 1,776 instances in the past four months, their lives as well. “Thousands are dying,” says Parkin. “Whatever you think of immigration, you must at least agree that children should not be allowed to drown.”

Parkin reads from her notes. “Some of them are Syrian refugees who have spent years in refugee camps and lost faith in the resettlement programmes,” she says. “A lot of Eritreans. A lot of Somalis.” She flicks over a page. Many of the children, especially the Africans, are on their own. Often, their families have been able to afford only one transit from Africa to Europe and have duly picked their eldest son “and kind of put all their eggs on that one basket”, Parkin says. “That kid will typically be exploited along the way. The children also tell us about how many children died of dehydration in the Sahara just getting to the Mediterranean. There are other kids who fall off the back of the truck and are left there to die in the desert.

“Once they get to the coast, there’s massive racism among the people smugglers,” Parkin continues. Syrians pay more and ride on the upper deck. Africans, who typically have less money, are locked down below without food or water. Those who cannot pay are kept under armed guard in camps on the Libyan coast until they can. “Like these four children I met,” says Parkin. “They were kept for nine months. They drank their own urine and ate their own faeces. One boy couldn’t even count how many friends of his had died.” Parkin flicks to a final page. “Almost all the women have been raped,” she says. The rapists include the smugglers and their paying customers. “This one woman was seven months pregnant,” Parkin says. “She tried to kill herself.”

The refugees start to disembark. The Red Cross arranges them in single file, leads them one-by-one into a small open-sided tent, notes their names and ages and conducts a brief medical examination. After that, the new arrivals are led out into the sun and given a moment to take in this new land. They are strangely uncurious, sitting in small, turned-in groups on the potholed concrete: an old woman with shaking arms helped by a young girl who might be her granddaughter; a man and his young son; two student couples with a tiny baby; a toddler in a grey Puffa jacket who seems to belong to no one.

A man in a scarlet coat, which indicates that he is from the International Organisation for Migration, addresses the crowd, trying to explain their rights and choices: they can go to a state migrant centre or find their own accommodation if they can afford it. Until they have either a visa or are granted asylum, however, they have no legal status and cannot work. They should hear if their applications are successful within 35 days. This seems important information. But few are listening. Instead, almost as though it’s an agreed plan, inside almost every group someone reaches deep inside a bag, extracts a mobile phone, switches it on and begins hurriedly texting.

After a while, observing this, you think: texting who?